Today, Ronnie Monroy woke up at dawn. He bought flowers and gifts. He went to the chicken restaurant next to Lima’s “Santa Mónica” Prison for Women and reserved the best table. He wanted everything to be perfect. Today, his latest conquest, Yadira, will walk free. Yadira is a forty-year-old Colombian, and Ronnie wants to surprise her with her favorite dish. Afterward, he’ll help her get settled at a hotel. They’ll walk together by the pier, and drink wine by the sea. In between anecdotes and smiles, there might be a little 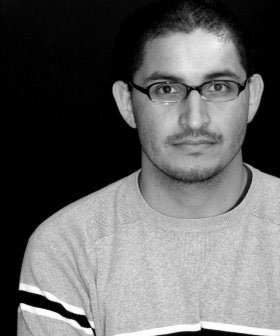 Josué Méndez (Lima, 1976) studied Film and Latin American Studies at Yale University. He wrote and directed the feature films “Días de Santiago” and “Dioses”, and worked on the production of “Paraíso”, “Las Malas Intenciones” and “Oliver’s Deal”, with which he has participated in film festivals like Cannes, Venice, Berlin, San Sebastian, Rotterdam and Toronto, and won over 50 international awards. “Días de Santiago” premiered in Competition at Rotterdam, going on to become the most awarded peruvian film ever, and selected to represent Perú at the Oscars. “Dioses” premiered in Competition at Locarno.