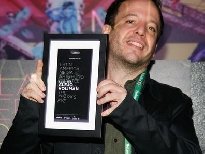 Today, 21st April, TFI announced the award winners for the TFI Latin America Media Arts Fund and first-ever Heineken VOCES grant at a celebration over the weekend for Latin American filmmakers during the Tribeca Film Festival.

•    City of the Caesars (Chile), Directed & Produced by Francisco Hervé, Edited by Andrea Chignoli — Two conspiracy theories. Two ordinary men. Wisdom, immortality and natural resources are at stake in a mythical place somewhere in Patagonia.
•    Cuando los Muertos Estan Mas Secos/When the Dead Are Drier (Bolivia), Directed & Produced by Claudio Araya Silva and Produced by Yara Morales Rivera — In the eighties, more than 50 women committed suicide in a small peasant community. Hermenegildo and Pedro return to their community, attempting to retrace the paths of memory regarding the deaths of their wives. The trip aims to unravel the mystery surrounding the life and death of these women.
•    Elena (Brazil), Directed & Produced by Ana Petra Costa – The film recounts the journey of Petra, a young Brazilian woman who dreams of becoming an actress but is warned not to do so by her mother. Against these admonitions, Petra moves to New York City where the reasons why she was advised against this path begin to unfold.
•    The Shark’s Eye (Argentina), Directed by Alejo Hoijman and Produced by Gema Juarez Allen — Summer is coming to Nicaragua and Maycol and Bryan will start to learn their families’ trade, shark hunting. In a place where traditional trades disappear in favor of drug trafficking, these two boys choose their future. A coming of age film set in the forgotten Caribbean coast of Nicaragua.

The TFI Latin America Media Arts Fund awards $10,000 grants to animation, documentary, or hybrid feature-length films in advanced development, production or post-production from filmmakers living and working in the Caribbean, Mexico, Central and South America. Grantees also receive exclusive guidance from TFI to ensure that each film reaches completion and enters the U.S. marketplace from the best possible vantage point.  The Fund is sponsored by Moviecity and CANACINE.

As part of the Latin Fund, the Heineken VOCES grant provides two additional grants to narrative and documentary projects helmed by Latino filmmakers (over the age of 21) who live and work in the United States. The mission of the grant is to encourage American Latino filmmakers to redefine, invent, explore and create visions and stories that reflect their diverse cultures.

The winners of the first-ever Heineken VOCES grant include:

•    Las Marthas (Heineken VOCES Award for Documentary)
A documentary about an extraordinary rite of passage in Laredo, Texas where Mexican-American debutantes are presented at a grand Colonial ball dressed as American revolutionaries – a border tradition that’s 114 years old.
Directed & Produced by Cristina Ibarra and Produced by Erin Ploss-Campoamor
•    Feriado (Holiday) (Heineken VOCES Award for Narrative)
The sheltered life of Juan Pablo is turned upside down when he must spend the carnival holiday with his wealthy family at their hacienda in the Ecuadorian Andes and meets Juano, a self-assured black metal fan from the nearby pueblo.
Written & Directed by Diego Araujo
Produced by Hanne-Lovise Skartveit, Juan Sebastián Jácome & Andrés Longares
Executive Produced by Frida Torresblanco
Cinematography by Bradford Young