DAMIANA was theatrically released on the 21st May in Buenos Aires with excellent reviews. MALBA and GAUMONT cinemas. 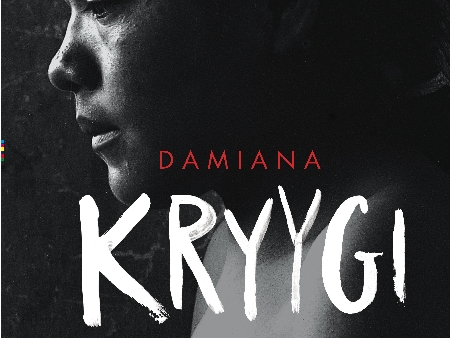 By Pablo Suárez
For the Herald
“Even if the person photographed was today completely forgotten, even if their name had been erased forever from the memory of men — and in spite of this, or actually precisely because of this — that person, that face demanded a name, they would demand not to be forgotten,” says renowned Italian philosopher Giorgio Agamben in his book Profanations, and these words are ably quoted by Argentine filmmaker Alejandro Fernández Mouján to express the goal of his new documentary Damiana Kryygi, the infamous story of an Aché girl who, after surviving her family’s being massacred by colonists, was doomed to become, over the years, an object of scientific study for anthropologists from the Museum of Natural Science of La Plata.

The Aché people are a traditional nomadic hunter-gatherer tribe living in small groups and completely reliant on the resources of the wild forest in eastern Paraguay. From the conquest period to the 20th century, the Aché, like so many other tribes, suffered ongoing abuses by rural Paraguayan settlers, ranchers, and landowners. In the early 20th century, the Northern Aché were the sole inhabitants of nearly 20,000 sq km, but in time they ended up confined on a couple of reservations with barely more than 50 sq km.

Not only that, they were also decimated and enslaved as to remove them from their ancestral homeland so that multinational investors could develop the lands for their own profit. Of course, you’ve heard this kind of story before. However, there’s something quite unique about the story of Damiana Kryygi, which is very well told in Fernández Mouján’s inspired documentary.

First, the facts: it’s 1896 and in the thick Paraguayan jungle, a three-year-old Aché girl survives the massacre of her family at the hands of white settlers. Their captors call her Damiana, and anthropologists of the Museum of Natural Science of La Plata, Argentina, turn her into an object of study for their racial research. When she turns 14, after showing a very natural, healthy and uninhibited sexual behaviour, she’s locked in a mental asylum.

And as to continue with the racial studies, she is photographed naked by anthropologist Robert Lehmann Nitsche in 1907. Two months later, she dies of tuberculosis, which inconceivably (or not) none of the professionals surrounding her had paid attention to.

From then on, another long and more uplifting story begins to unfold, one that has to do with finding and repatriating her remains — but this story is for you to learn while enjoying Damiana Kryygi, the film.

With nearly perfect editing, carefully-designed photography, the right narrative tempo, and telling testimonies that are never anecdotic, but instead go for the most visible issues as well as those that lie underneath, Fernández Mouján’s new film is a valuable document, both emotionally-moving and intellectually-stimulating, that pays respectful tribute to a story filled with pain — but also with hope.

In fact, it’s quite hard to strike the right balance between emotions and intellect, and the truth is that both are somehow necessary to deliver a compelling documentary that deals with such a humanistic subject. Let alone not being exploitative and falling into cliché, which Damiana Kryygi, the film, never does. And in telling this particular story, Fernández Mouján also depicts the many shades in the complex story of the Aché people with strong commitment and profound empathy.